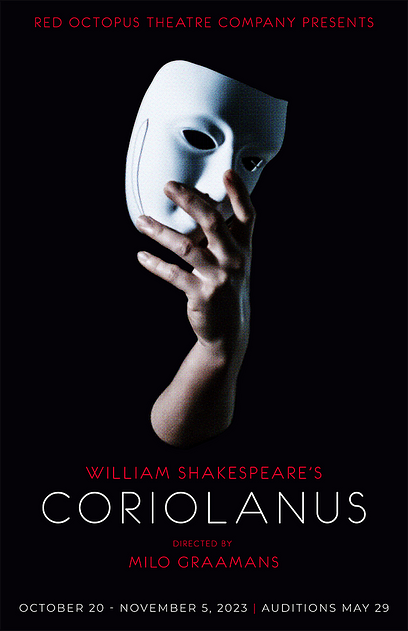 Red Octopus Theatre Company's auditions are open to the public, and appointments are not necessary. Please arrive on time and let the attendant know if you will need to leave early. Callbacks are by invitation only.

Red Octopus Theatre Company is committed to inclusivity and does not discriminate with regard to gender, race, age, size, or ability. Most characters we encounter currently are on the binary and are written with he/him or she/her pronouns, and you will see that in the descriptions we provide. But however limiting the descriptions are, our casting seeks to be as inclusive as possible and we invite gender non-conforming, genderqueer, transgender, and non-binary actors to submit for the roles they most identify with. We will also list race/ethnicity when specific to the character, but are otherwise seeking all races and ethnicities. Please let us know if you have any questions, concerns.

Coriolanus
By William Shakesepeare
Abridged and directed by Milo Graamans

Coriolanus, an arrogant celebrity soldier in ancient Rome, has become a political candidate. When the citizens see his true colors, they banish him from the city. Out of spite, Coriolanus joins forces with his former enemies to seek revenge on Rome.

This production presents Coriolanus as a political tragedy, and contains no onstage violence. Using the original (but abridged) text, the setting is modern, with the common Roman citizens indistinguishable from the audience.

All roles are open to actors of any age, race, or gender.

Caius Martius Coriolanus — An arrogant soldier with celebrity status. As he runs for political office it becomes evident that he is out of touch with the public.

Volumnia — Coriolanus's cold-hearted mother who raised him to be a warrior; she is a strong matriarch.

Menenius Agrippa — A Roman nobleman, well respected by the people, and a friend to Coriolanus.

Sicinius Velutus & Junius Brutus — The crafty tribunes who manipulate the crowd into voting against Coriolanus.

Tullus Aufidius — A Volscian general and greatest rival to Coriolanus.

Cominius — A former Roman consul and one of Coriolanus's friends and commanding officers.

ENSEMBLE ROLES
(Please note that if you are cast in an ensemble role, you will most likely be doubling two or more of the following parts.)

Citizens — The citizens decide whether to elect Coriolanus as consul. These are fun roles with a lot of fourth-wall breaking.

Valeria — A friend to Volumnia and Virgilia.